What about future truck traffic?
The future year (2045) traffic forecasts estimate an annual average daily traffic (AADT) of 20,100 vehicles on US 15 south of Bishopville, with daily truck volume estimates of 2,400 trucks south of the city limits and 2,250 trucks north of the city limits. Truck traffic is expected to account for 19% of future total traffic volumes (versus 13% in 2015).

Why is this project moving forward after it was voted against?
The National Environmental Policy Act (NEPA) process for the project was initiated in 2010 and the South Carolina Department of Transportation (SCDOT) prepared an Environmental Assessment (EA). The EA analyzed seven alternatives for heavy trucks traveling on Main Street (US 15) through downtown and a no-build (or "do-nothing") alternative. The EA identified a Preferred Alternative and was approved in September of 2012. At the November 2012 Public Hearing, a majority of those in attendance were not in favor of the Preferred Alternative. Subsequently, the City of Bishopville and Lee County passed resolutions against the Preferred Alternative proposed in the EA.

Because of the public controversy associated with the project, the Federal Highway Administration (FHWA) informed SCDOT that an Environmental Impact Statement (EIS) would have to be prepared if the Santee Lynches Regional Council of Government (SLRCOG) wanted the project to move forward. A Public Information Meeting was held in February 2015 to update the public on the project status and to present options for moving the project forward. The SLRCOG Board of Directors, in a letter to SCDOT (March 27, 2017), stated their desire to proceed with the project and with the preparation of an EIS.

How would the Bishopville Truck Route Project support economic development?
Lee County continues to experience declines in population and employment resources. A number of regional economic development initiatives have been proposed or implemented for the Bishopville area, including water and sewer upgrades, downtown revitalization efforts, workforce education, establishment of two, industrial sites (James Industrial Park and the I-20 Industrial Center), industry recruitment, and a proposed development district near I-20 south of downtown. The failure to address the disruptive effects of large trucks traveling through downtown could inhibit the effectiveness of these initiatives.

How much will the Bishopville Truck Route Project cost and how would it be funded?
Based on preliminary design, the project is estimated to cost approximately $22.6 million to construct. Between 2004 and 2006, Lee County and the City of Bishopville secured approximately $5.6 million in Congressional earmarks for the proposed project through various appropriations and transportation acts. The SLRCOG has programmed federal funds through the "guideshare" rural transportation planning program for the proposed project totaling approximately $25.4 million. The Lee County Transportation Committee (CTC) has also allocated $720,000 in local funds that will be used as matching funds for the earmarks.

The project is included in the SCDOT Statewide Transportation Improvement Program (STIP). The STIP identifies all transportation programs and projects that are funded with federal funding, as well as other significant projects funded by the state or local governments, including the State Transportation Infrastructure Bank and local option sales tax programs. The STIP only includes projects for which there is committed funding available and is therefore fiscally constrained.

If the Bishopville Truck Route Project does not move forward, what happens to the funds?
If the No-Build Alternative is selected, all funds will be reallocated to other projects within the Santee-Lynches regional transportation planning district (rural portions of Kershaw and Sumter Counties and entirety of Lee and Clarendon Counties).

What is the schedule for the Bishopville Truck Route Project?
SCDOT, in cooperation with FHWA, have been conducting field investigations and preparing technical studies in order to further evaluate the alternatives presented at the August 22, 2019 Bishopville Truck Route Project Public Information Meeting. SCDOT and FHWA are currently in the process of preparing a Draft Environmental Impact Statement (DEIS) for the project, which is scheduled to be available for review in the spring. 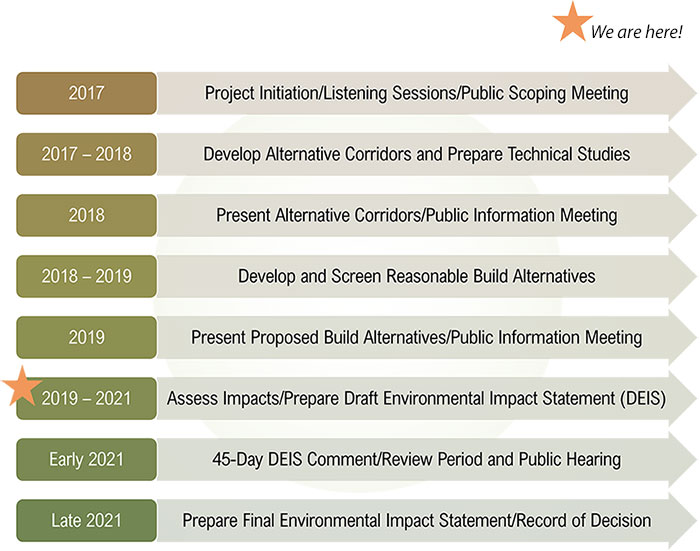 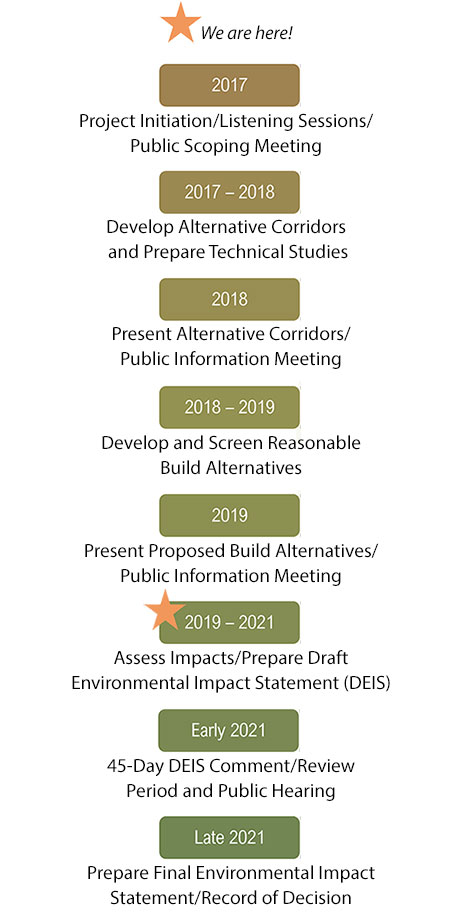 What will be included in the Draft Environmental Impact Statement?

Chapter 1 includes a brief overview of the project including project history, how the project would be funded, what a DEIS is, and what you should do next.

Chapter 2 summarizes the purpose and need for the project including information on current and future traffic conditions.

Chapter 3 describes how project alternatives were developed, analyzed, and screened; and discusses why certain alternatives were carried forward for detailed analysis, what factors led to the elimination of alternatives, and ultimately how SCDOT identified a preferred alternative.

Chapter 4 includes an overview of the existing resources (i.e., human, cultural, natural, and physical) located in the project study area and the potential adverse and beneficial effects on these resources. Chapter 4 also discusses avoidance, minimization, and/or mitigation measures for the potential effects where appropriate.

Chapter 5 provides an overview of the public involvement activities from the inception of the project through the development of the DEIS.

How can I provide comments to the Bishopville Truck Route Project?
The SCDOT would like your input about the project and DEIS once it is issued. You are encouraged to submit your comments on the DEIS via mail, email, or the project website.

In addition, SCDOT and FHWA will hold a Public Hearing during a 45-day DEIS comment period. The purpose of the Public Hearing is to give you an opportunity to discuss the project with SCDOT and the project team, and to comment on the DEIS and Preferred Alternative. Once the hearing date and location have been set, SCDOT will notify the public of the details via the project website, an ad in the local newspaper, and a road sign. SCDOT and FHWA will consider all input and comments received on the DEIS and prepare a combined Final Environmental Impact Statement (FEIS)/Record of Decision (ROD), which is scheduled to be issued by next summer.